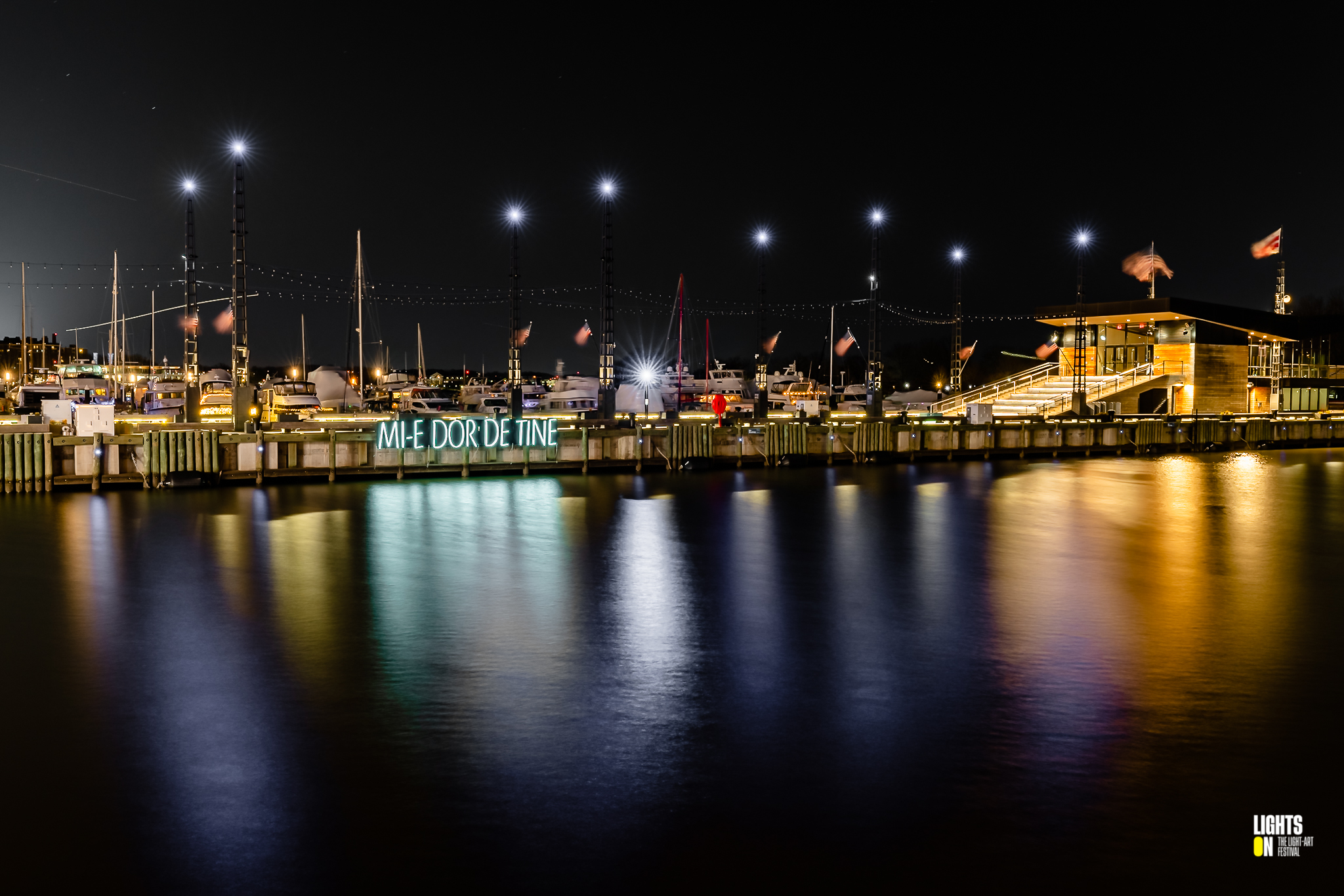 Starting this Valentine’s Day, a large neon artwork showing the words “MI-E DOR DE TINE” (“I MISS YOU” in direct translation from Romanian) will be visible at The Wharf. The exhibition, scheduled to last until March 21st, is dedicated to the Romanian diaspora living in the D.C. Area.

One in four Romanians currently resides outside Romanian national borders, most of them in Europe, some in other places, many of them in the United States. The “MI-E DOR DE TINE” neon artwork is a declaration of reunification dedicated to them, a message of hope from those left behind in Romania.

That being the context, it’s easy to understand why a large neon sign with the meaning “‘I MISS YOU” became one of the most recognizable contemporary art installations in modern Romania, being already exhibited in London (2019) and Chicago (2021) to great public admiration, before reaching The Wharf in Washington, D.C.

“MI-E DOR DE TINE is a simple, yet profound statement that manages to touch the souls of those speaking Romanian in a very personal way. People come to see it, take pictures of it and they send those pictures to their loved ones, thousands of miles away. It gives them a sense of comfort and hope”, says Andi Daiszler, the creator of the “MI-E DOR DE TINE” artwork and president of the Daisler Association, the NGO that managed to organize the exhibition.

While “MI-E DOR DE TINE” will be on display at The Wharf, its two sister-artworks ȘI MIE and TE AȘTEPT (ME TOO, respectively I AM WAITING FOR YOU in direct translation) will be visible in two Romanian cities, so that the Romanian audience can respond via pictures to the declaration from the United States.

All three exhibitions are proudly endorsed by the Romanian CEC BANK.

“For 157 years, we have been sharing the values of Romanians and we’ve been close to them wherever they are. “Dorul” (in a rough translation meaning the sense of longing) is an emotion that transcends boundaries and unites souls from a distance, the Chicago experience being a powerful proof of this. On the celebration of love, we are glad to contribute once again to the creation of a unique and emotional moment for those who have gone abroad.  We hope that, at least for a moment, Romanians in Washington will no longer feel the barriers of language and distance, but only the proximity to their loved ones, who remain on their native lands”, says Alexandra Frunză, Head of Identity and Communication CEC Bank.

The project is supported by the Romanian Embassy to the United States and the Romanian Cultural Institute in New York City.

“This message is more than a bright display: it connects communities, shows the indestructible link between Romanians in the United States and those at home, and is a written legacy of belonging. I arrived in the USA less than a year ago, but I already miss my friends and family. The message is reminding us of the things that matter: our homeland, Romania, our community, family and friends. It can be a strong connection between us all, one that generates strong emotions.

I would like to thank all those who made possible the display of this symbolic message here. As ambassador, one of my goals is to support the Romanian-American community and its initiatives and projects. I am happy to see such a great initiative and I can only be proud to be a member of this community.”, says the Ambassador of Romania to the United States of America, Andrei Muraru.

“We Romanians are the world’s greatest specialists in longing, and in “dor”, which is love, and homesick and nostalgia all together, we have a beautiful word to prove it. We are excited to offer our support to a project that makes this complex feeling so palpable and immediate. This luminous sign on the Potomac River that reads “Mi-e dor de tine”/ “I miss you”, created by Daisler Association as a distillation of the feelings shared by many Romanian-Americans, has become the point of imaginary embarkment to everybody and everything we love”, says Dorian Branea, Director of the Romanian Cultural Institute in New York City.

“It meant a lot to me to be an active part of this project here in Washington, DC, to continue the dialogue started in Chicago with our loved ones back in Romania. I am proud to have it in our city. Our goal is to warm people’s hearts during this season abundant in reasons to celebrate love, friendship, and longing: Valentine’s Day, Dragobete (February 24) , Martisor (March 1), and International Women’s Day (March 8th). This is our present to you from us, Washington, DC!”, mentions Daniela Kammrath, founder of www.romanianatheart.com.

The Daisler Association is an NGO registered in Cluj-Napoca, Romania, running cultural projects dedicated to changing the way we interact with the spaces around our cities since 2016. MI-E DOR DE TINE was, in 2018, the first artwork to be on display for the first edition of Lights On Romania - a light-art festival different from any other organized in Romania. Since then, it has been featured in all major Romanian media outlets.

Further information about the exhibition can be found solely in Romanian on https://despredor.org.